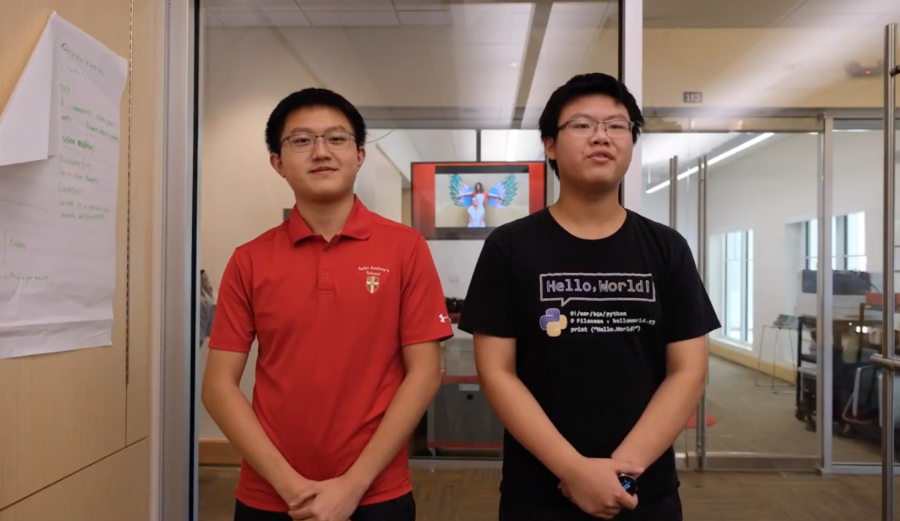 Congressman Ted Deutch offered his praise of the boys. “At a time when it’s a challenge to collaborate, you’re able to excel,” he said.Xiangcheng (X) Ji, Zhongxuan (Daniel) Wang, and Letian Wu’s received gift certificates from Southwest Airlines and Amazon for their achievements.

The three Scots developed an app that detects with 93% accuracy the type of brain hemorrhage for faster medical treatment.  An informative video of the “Deep Learning Intracranial Hemorrhage Diagnosis System” was shown detailing how the App works.

This is the second win in a row in the App Challenge contest for Xiangcheng (X) Ji. Last year, Xiangcheg and his peer Maizhe (Michael) Yang ’22 created an app in Python that they call Superpass that creates a local database to store facial scans of various users. Upon running, the app attempts to recognize the primary face against the database. The software then interacts with a small embedded device attached against the door that, upon recognizing a saved face in the database, sends an electric signal to a door lock that triggers the door to unlock. Click here to read more about last year’s AppChallenge achievements.
“This is a great way to put us on the map, said Michelle Murray, department chair. “You started a streak,” added Joey Uriate, computer science teacher.
The app challenge, now in its sixth year, is meant to encourage young people all across the country to focus on computer science and to recognize that these skills can help their community and their schools. Each year, a panel of independent expert judges review the apps submitted from the districts and selected the winners. Judging is based on the quality of the idea, implementation of the idea, and demonstration of programming skills.
Saint Andrew’s joins Computer Science teachers Mr. Uriarte, Mr.Van Voorhis, Mr. Bassil, and Ms. Murray in showing effusive pride and support for the accomplishments of Xiangcheng (X) Ji, Zhongxuan (Daniel) Wang, and Letian Wu.
Delete Image
Align Left
Align Center
Align Right
Align Left
Align Center
Delete Heading